What has six legs and is very annoying? Well, lots of things I guess.  But now there is one based on the 6-pin ATtiny10 microcontroller. 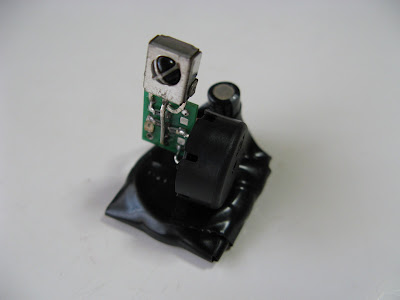 Basically it does this:
1. Lies in wait until it detects a remote control signal.
2. Records the signal and waits for 30 seconds.
3. Resends the signal.
4. Plays a little tune you may have heard before.

Why is that so annoying? Imagine sitting down to watch some TV. You hit the power button on your remote. 30 seconds later the TV unexpectedly turns off. As if that weren't enough, you then have the opportunity to hear a short, square-wave rendition of your favorite song.

Here is a little video you should watch:

And here is the beautiful schematic made with MSPaint:

And here are a couple pictures of the one I made: 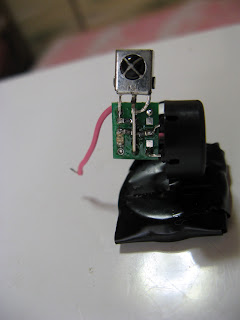 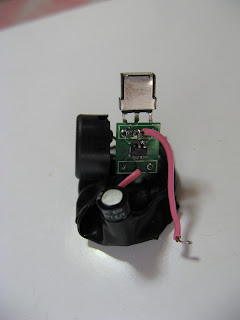 But wait! Before you go putting it all together, remember that you have to be able to program the thing. This hardware setup is not programmer friendly, so make sure you have the program on the chip before soldering it all. I soldered the chip onto the breakout board, programmed it, then put the rest on.

Writing the code presented a variety of challenges. I repeatedly went over the 1024 byte limit and had to optimize things a bit. Also, with only 32 bytes of ram I had to be very careful. I ended up using 22 of those bytes to hold the timing and sequence information for the IR signal. The stack didn't use more than 8 bytes anywhere, which left me with 2 extra peace of mind bytes.

The assembly code is included at the end of this page. It is easy to change the tune or delay intervals, but you will have to dig your way through the code to do so. Some things to note are:
- The tiny10 goes into power-down sleep mode while it waits, so it won't burn through your battery.
- It will record up to 64 bits plus a header pulse as long as nothing is longer than about 12ms. This covers any of the common remote protocols, as far as I know.
- It records four timing values: header on, header off, long on, short on, long off, short off.

;
; The rick rolling mosquito
;
; Copyright 2012 Eric Heisler
;  This program is free software: you can redistribute it and/or modify
;  it under the terms of the GNU General Public License version 3 as published by
;  the Free Software Foundation.
;
;  This program is distributed in the hope that it will be useful,
;  but WITHOUT ANY WARRANTY; without even the implied warranty of
;  MERCHANTABILITY or FITNESS FOR A PARTICULAR PURPOSE.  See the
;  GNU General Public License for more details.
;
; receives data up to 64 bits plus a header
; waits for 30 sec
; transmits the received data
; waits a second
; rick rolls
;
; >pin 1(PB0) piezo
; >pin 3(PB1) tx
; >pin 4(PB2) rx
; >pin 6(PB3) reset
;
;

; time the rest of the bits
receiveBits:
rcall timeOn

onbitdone:
; the bit is set, now for the off time

; then the data
ldi rinstop, 0xFF

How do you actually program the chip? With an Arduino board or something?

@ME:
I was able to modify your code to work on Attiny13a with some understanding on how it works.

I removed the clock divider part since attiny13 doesn't have CLKPSR. However, I have disabled the CKDIV8 fuse so it runs now at 4.8MHz

what freq are you running yours at? or is your code self adjusting to each IR protocol lengths?

@Fahad -
The Attiny13 can do this much more easily than the tiny10 because it has 32 registers(not 16) and 64 bytes of SRAM (not 32), but most of this code should still work. The clock system is very different, but I guess you have that figured out.

This is running at 8MHz, so the 9.6MHz option for the tiny13 would be closer. This code actually measures and records the lengths of the signal's on and off times, so it shouldn't matter, but 9.6MHz will give you twice the resolution.

I think I have really come on the right place for getting the perfect info.
sterling va mosquito control

The code may generate an error on the .DEF r26 as that may already be defined in the Attiny10 header file as 'XH'.
Solution: change the code as follows:
;.DEF rnotelength = r26 ; the time to play the note
#define rnotelength XH

For those (like me) who haven't worked with assembly, is there a way to convert this code into something more familiar in, say, Arduino IDE?

@Ken Martin -
I don't know of an automatic way to convert assembly into something you could use in Arduino IDE. But it might be out there somewhere.
Although you could write the code in C, you would certainly run out of RAM and the program would be too big. The assembly I wrote uses almost every byte of available flash, RAM and registers. It even dedicates some of the registers to hold variables. But, if you want to use the code on a bigger chip, say an ATTiny85, you could certainly write it up in the Arduino IDE. It would look a whole lot simpler and could use libraries like Tone to handle the music.

I reused your code and made an IR earbud. I wanted to be able to hear IR data if it was being transmitted. Essentially I switched the piezo-buzzer to the IR output instead of playing the music. Thank you posting everything so far.